Climate change is already affecting inland fish across North America — including some fish that are popular with anglers. Scientists are seeing a variety of changes in how inland fish reproduce, grow and where they can live, according to four new studies published this week in a special issue of Fisheries magazine.

Fish that have the most documented risk include those living in arid environments and coldwater species such as Sockeye Salmon, Lake Trout, Walleye, and prey fish that larger species depend on for food. Climate change can cause suboptimal habitat for some fish; warmer water, for example, can stress coldwater fish. When stressed, fish tend to eat less and grow less. For other fish, climate change is creating more suitable habitat; Smallmouth Bass populations, for example, are expanding.

These changes will have direct implications – some good, some bad – for recreational fishers, who, in the United States alone, contributed nearly $700 million in revenue to state agencies through license, tag, stamp, and permit purchases in 2015. Annually, anglers spend about $25 billion on trips, gear, and equipment related to recreational fishing in U.S. freshwaters.“The U.S. Geological Survey and partners are working to provide a fuller and more comprehensive picture of climate change impacts on North American fish for managers, scientists, and the public alike,” said Abigail Lynch, a lead author and fisheries biologist with the USGS National Climate Change and Wildlife Science Center. 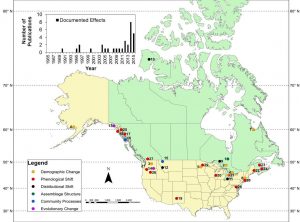 Scientific studies between 1985 and 2015 that document climate change on North American inland fish. The color of the dots represents the fish response to climate change in each study.

The authors reviewed 31 studies across North America and Canada (see map) that document fish responses to climate change. The manuscripts describe the impacts of climate change to individual fish, populations, recreational fishers, and fisheries managers. One of the takeaway messages is that climate change effects on fish are rarely straightforward, and they affect warmwater and coldwater fish differently.

“Thanks to this synthesis, we can see the effects of climate change on inland fish are no longer just future speculation, but today’s facts, with real economic, social, and ecological impacts,” said Doug Austen, Executive Director of the American Fisheries Society and publisher of Fisheries magazine. “Now that trends are being revealed, we can start to tease apart the various stressors on inland fish and invest in conservation and research where these programs will really make a difference in both the short and long term.”

The authors emphasize that resource managers can take many actions to help sustain resilient fish communities and fisheries. “Even though climate change can seem overwhelming, fisheries managers have the tools to develop adaptation strategies to conserve and maintain fish populations,” said Craig Paukert, a lead author and fisheries scientist at the USGS Missouri Cooperative Fish and Wildlife Research Unit at the University of Missouri.

Smallmouth Bass provide one example of how climate change presents fisheries managers with both challenges and opportunities. Smallmouth Bass, a popular recreational species, are expanding their range northward with climate change. This expansion can disrupt existing food webs but it also creates new prospects for recreational fishing. Because many recreational fishers want to catch Smallmouth Bass, managers may need new management techniques to accommodate the increased fishing demand while still maintaining the native coldwater fish communities. Consequently, said Paukert, the management process may likely be an exercise in managing expectations of the stakeholders for fisheries changing with climate change.

“The current state of the science shows that climate change is impacting fish in lakes, rivers, and streams, but knowing that is just the first step in effectively addressing the changes to these important natural resources and the communities which depend upon them,” Lynch said. 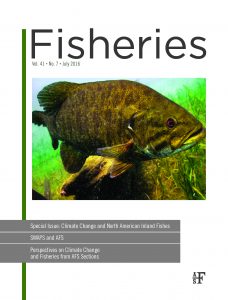 The following papers are available in Fisheries magazine, published by the American Fisheries Society:

This research was supported by the USGS NCCWSC, which collaborates with universities, resource management organizations, tribes, and other partners to provide unbiased scientific data and tools that contribute to an understanding of the widespread impacts of climate change on fish, wildlife, ecosystems, and people. Their science directly addresses on-the-ground, real-time needs of natural and cultural resource managers and human communities, enhancing their capacity for adaptive management in a changing climate.

Founded in 1870, the American Fisheries Society (AFS) is the world’s oldest and largest fisheries science society. The mission of AFS is to improve the conservation and sustainability of fishery resources and aquatic ecosystems by advancing fisheries and aquatic science and promoting the development of fisheries professionals. With five journals and numerous books and conferences, AFS is the leading source of fisheries science and management information in North America and around the world.